Killing Time Among Other Things, or a Look At Novels About Assassains 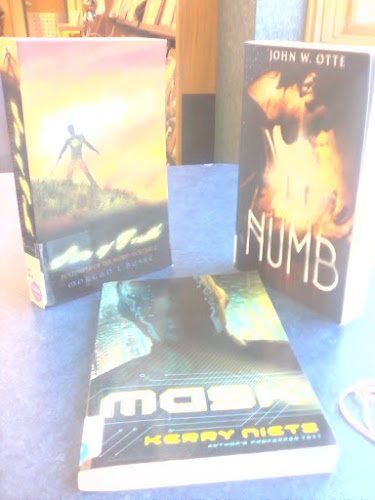 How many of you have dreamed of becoming a professional assassin? Or at least hanging out with them? I don't see many hands raised.

Most stories tend to have a positive protagonist: a police officer, a soldier, a doctor, a parent, or just an all-around decent person. There are some that have a negative protagonist, on the other hand. An assassin would probably fall into that category.

Above are a trio of Christian novels featuring assassins. All of them are stories of redemption. Interestingly, all were originally published by Marcher Lord Press, which now is known as Enclave Publishing. The two in the back are still available by that publisher, the third can now be purchased via Freeheads.

Let me look at them in alphabetic order by title.

Mask by Kerry Nietz (pronounced Neets) looks at a post-apocalyptic era where citizens still have the right to vote. However, don't think of voting as going to the polling place and picking who you'd like to lead the country (or more often picking who you would less dislike to lead the country). Instead, picture the reality TV show Survivor. Except those voted off don't join a jury or even go back home.

Technically, Radial is not an assassin. He's a collector. His job is to pick up people voted away as inconvenient. Then, he has an assignment that makes him reconsider his method of living.

Numb by John Otte (pronounced Ah-tee) is also set in the future, but unlike the earthbound Mask, this tale takes place in outer space. The Crusader does the dirty work for the Ministrix, the kind of government left-wingers fear if the Religious Right took over the country. One thing that helps Crusader is that he is numb, both physically and emotionally. Then, like Radial, an assignment shatters the life as he knows it and changes him from hunter to hunted.

Son Of Truth by Morgan Busse (pronounced Bus-see) is actually the second part of the fantasy trilogy Follower Of The Word. Caleb Tala is introduced in Daughter of Light as an assassin, until he encounter truthsayer Rowan Mar. Rowan is the main character of the series, but Caleb's journey is developed throughout as well.

Of course, there's another Christian story about an assassin. His name was Saul, and he came from a place called Tarsus. Anybody familiar with him and his story?

Has there been anybody that you think God couldn't do anything with and He proved you wrong?