Have You Encouraged Your Favorite Author/Musician/Minister/Friend Lately?

Has anybody found 2020 to be disappointing, discouraging, depressing, or all of the above?

So I'm not the only one?

I want whatever I do to be for God's glory, and not mine. Which leaves me struggling with the novel I started in '07 and am still trying to get published. Am I seeking its publication for God's glory or for me to have the sense of accomplishing something?

Even if it's for the former reason, is it what God wants me to spend the time writing and editing and rewriting and re-editing and submitting to one or two or three hundred editors/agents hoping I finally cleared the hurdle? Or is it taking the time from what God really wants me to be doing?

I feel the same way with my Facebook posts and even this blog. Is it impacting anybody? There are times when the response to my contributions is drowned out by the chirping of the crickets and even the noisy communication of passing by of a herd of giraffes. Oh, and a free zoology lesson - giraffes make no sound - they're mute.

I gave an alliterated adjective list above, and I could add a fourth - debilitating. Sometimes those concerns can paralyze me.

First, let me say that anybody trying to accomplish something feels the same way, be they a novelist, a non-fiction author, a musician, a pastor, a missionary. I have a hunch anybody reading this (all three of you?) occasionally asks the same questions. We all need encouragement.

Second, let me give one thing that helps me, and that is encouraging others, hopefully giving them an oasis in the desert of the 'd' adjectives previously mentioned.

Do you have a favorite author (fiction or non-fiction)? You can encourage them by corresponding with them. An Amazon review would also help - I try to write my reviews pointing out the specifics of why I enjoyed the book. So can mentioning it on Facebook and getting the word out. I've had the honor of being mentioned in acknowledments of books by Kerry Nietz and Donna Fletcher Crow.

Similar methods help with musicians and other artists. Tod Moses, a musician friend of mine, has commented that I remember some of his compositions that he's forgotten. If it's a local singer, make a request for something they've written. I also have brightened the spirits of artists like my church-planting painting friend Kerry Jackson by mentioning art by them that moved me.

The same is true with ministers. I have a hunch that pastors are blessed when they see someone take notes and then make comments or even ask questions as a result. (Another way is staying awake during the sermon, one which I need work with at times.) Also, missionaries are blessed by correspondence as well.

Are there various things you do to encourage others, including authors, musicians, ministers, and the like? Do you have any story of how you have blessed someone else's life, or how somebody else encouraged you?

Posted by Jeffrey C. Reynolds at 11:34 AM No comments:

Self-Promotion: Pride, A Necessary Evil, Or A Ministry Opportunity?

In a paper written by my friend Robert Roberg titled "The Hidden Danger of Art", the first thing he mentioned is the self-promotion that is involved, when Christians should focus on others and God.

At Taylor University's Professional Writers Conference a month ago, my friend James Watkins gave a different point of view when he stated, "The first two letters of 'message' is 'me.'"

Over the decades, I've heard Christians debate the issues of self-esteem and self-love. One quote I've heard is you need to love yourself before you can love your neighbor as yourself. Others say that when Scripture talks about self, it doesn't use words like "love" and "esteem" but rather "control", "deny", and "crucify."

Today we see politicians promoting themselves. That wasn't the norm in the past. In the 1800's, few presidential candidates did not do as much speaking on their own behalf, and those that did always lost. While William Jennings Bryan was running himself ragged going to the crowds in the 1896 campaign, William McKinley stayed home where the crowds came to his house to hear him. Things are different now, but are they better?

Likewise, nowadays self-publishing or releasing your own music project is more common than it was a few decades ago. I remember getting a call from a self-publishing company where the saleslady repeated two primary points - 1) the book I wrote needs to be published, and 2) self-publishing allows me to keep 100% of the profits. (Never mind that I spend my money upfront so a percentage still goes to the publisher.)

But is all self promotion pride? Let's go back to Proverbs 27:2. Notice the word is "praise". We're not to praise ourselves. If we're stating that our book is the best song ever written, then we're stepping over the line. But if we feel we're supposed to communicate something, we have the opportunity, the privilege, the mandate to get the message out. Everybody came to McKinley's house. If they're not coming to yours, you need to go and promote the message.

Now, is the message God's message or ours? The answer should be yes. There are times we feel God's direction. But I've heard songwriters say, "I didn't write this song, God did." Well, He may have guided the composer in writing it, but God used the writer's language, vocabulary, and music style in writing it.

I read James Scott Bell tell about aspiring writers saying, "I could never write like (insert name of famous author)." Bell replies, "No, you can't write like them. And they can't write like you." Moving from arts to ministry, I get blown away by apologists like Gary Habermas, Francis Schaeffer, and Ravi Zacharias and think that I can't defend the faith like they do. But God has enabled me to contend for truth the way Jeffrey C. Reynolds does.

What message has God given you to share? What can you do to allow the message to be heard?

Posted by Jeffrey C. Reynolds at 11:31 AM No comments:

Stories That Impacted My Life 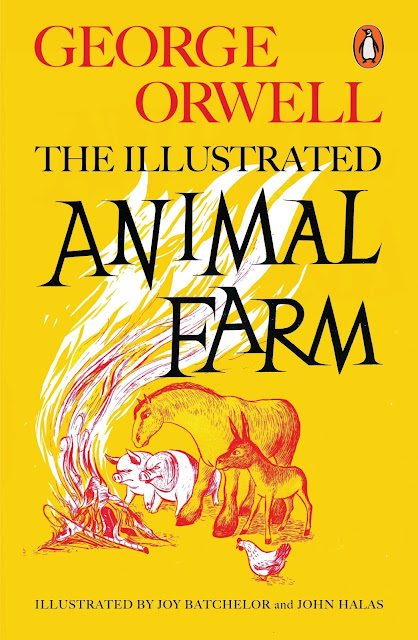 Monday, August 17, 2020 is the 75th Anniversary of George Orwell's Animal Farm. I read it on a Sunday afternoon at the laundromat and home in the mid-'70's, and it impacted me like no other fiction book. At this point, I had already read 1984  previously (and was surprised it wasn't in the Sci Fi section of the library), but it didn't leave me in shock as Animal Farm did. I'll never forget the line "All animals are equal, but some animals are more equal than others.

Allow me to share five other stories that also impacted me, in order of release.

If I had made the list in the order I read them, The Phantom Homer by John R. Cooper would be the first on the list (with And Then There Were None second and Animal Farm third). While the above two were more disturbing, The Phantom Homer had the opposite effect. This book and the rest of the Mel Martin Baseball series helped me love baseball and story telling.

I believe I had the honor of hearing Frank Peretti speak in person before
reading any of his books, and I believe I received the first four chapter sample of Piercing The Darkness that night, so I read book two of his series before the classic This Present Darkness. It wasn't the first Christian novel I read, but this one definitely made an impact on me (or I wouldn't be including it in the list). My favorite part was the conversation about moles and how they don't seem to know where one yard begins and the other ends.

When Amish fiction was the craze, Marcher Lord Press founder Jeff Gerke made up a mock cover titled "Vein Pursuit: The Latest Of The Amish Vampires In Space Series." Author Kerry Nietz thought some one should write the novel, but not him - his stories were dystopian and the Amish Vampires title seemed to yell "Campy!" But then, he thought of an idea that would work and 30,000 words later he let Gerke know what he was up to.

This book is serious science fiction, but what I enjoy the most is the theme of community, the scope of that community and our responsibility to the community. And if you don't think this book would be your type ... well, do you like Green Eggs And Ham, Sam I Am?

My final entry is technically not a story, and it is classified in the library as a philosophy book, but I'm including this one because it looks at Captain Americ and uses him as a focus on a book about ethics. This is not a Christian book - I've read the author's contributions to other superhero pop philosophy books and my guess is he considers himself a Taoist since two of his contributions focused on the subject. Thus, I don't agree with all he says. But I found this a very well written book on virtues.

Your turn. What books have influenced you?

Email ThisBlogThis!Share to TwitterShare to FacebookShare to Pinterest
Labels: Amish Vampires In Space, And Then There Were None, Animal Farm, Animal Farm 75th Anniversary, Influential Books, Piercing The Darkness, The Phantom Homer, The Virtues Of Captain America

Let Us Stir Up Love And Good Works!


"And consider one another in order to stir up love and good works, not forsaking the assembling of yourselves together, but exhort one another and so much the more as you see the day approaching." (Hebrews 10:24-25, NKJV)
We're probably familiar with verse 25, which starts with the word "not". We may not be as familiar with the preceding verse, which actually begins the sentence. And we may put the emphasis on the "don't forsake the assembling" instead of "exhort one another."

Likewise, we may look at our well organized church service as fulfilling that passage. But Hebrews is not a pastoral epistle. It is talking to the whole church. The leadership's job is to equip believers for the work of the ministry (Eph. 4:11-12). We should be involved in this as well.

Let me move to the writers and musicians and artists. Are we focused on stirring up love and good works in our talents?

One thing I miss in church services is special music, though I think special music could go deeper. Often, it is a singer singing a song everybody knows that some established singer or group has previously recorded. To me, it could be a 3-4 minute sermon with musical accompaniment. Also, it could be an opportunity to develop songwriters in the church.

We are in a time where there are limits on indoor meetings, and in California singing is banned because of COVID. But are we able to meet in small groups? Can we work together to meet urgent needs?

What are ways we can stir up love and good works?

Posted by Jeffrey C. Reynolds at 2:38 PM No comments: