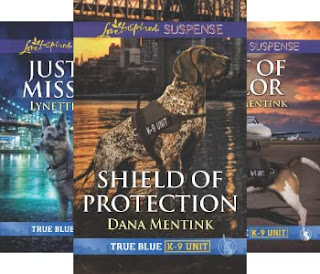 Starting with this note - I have read six of the ten parts of this series. I missed the opening prequel and first novel as well as the final two. The ones I read were:

This series is somewhere between one and two. Each is a story with its own hero, heroine, main villain, and K-9 star, with a clear resolution at the end. However, this series also deals with the murder of the unit's chief, Jordan Jameson, and the search for his missing dog Snapper. That big story picks up more and more steam starting with part 6 - Seeking The Truth. Also, you see the same characters pop up through the series, and each story ends with a hint of what the next story will deal with. Considering its 11 stories are written by 9 different authors, you have a well done set.

One fascinating thing is that there are several different breeds of dogs throughout the series: German Shepherds, a Beagle, a couple of Labs, a Springer Spaniel, a Bloodhound, and a Rottweiler in the mix. No, these dogs don't have the same responsibilities as each other. Some are trackers, some sniff for drugs or explosives, as well as those who catch and bring down the crooks.

Yes, you have a male writer who is hooked on Harlequin's Love Inspired Suspense. But I really have enjoyed this series.

Posted by Jeffrey C. Reynolds at 2:00 AM