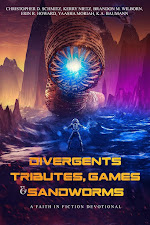 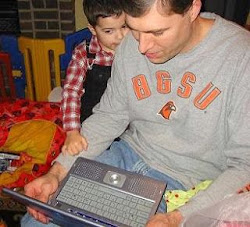 Late October 2013. With less than a week before posting date on the Hoosier Ink blog I then contributed for, my scheduled interview fizzled at the last minute. What do I do?

I then remember seeing an ad for a book that just came out that not only sounded interesting, but it also fit the Halloween season. This novel, the first of the Peril in Plain Space series, was Amish Vampires In Space, written by Kerry Nietz (pronounced Neets). So I contacted Kerry and a week later I posted one of my favorite interviews.

I've read several of his novels as well as his auto-biographical Fox Tales: Behind The Scenes Of Fox Software, and thoroughly enjoyed each one. He also is a contributor to a devotional series which I'll mention later. So here's my interview with Kerry Nietz.

JR: I believe your most recent project is a contribution to the second volume of the Faith In Fiction Devotionals (you also wrote the foreword in the first volume). That series is exactly what I'm trying to deal with in this blog. Could you tell us about that series, and are there plans for more?

KN: I’d be happy to, Jeffrey. The Faith in Fiction devotional series is the brainchild of author Christopher Schmitz and is geared toward the large segment of Christians out there that enjoy science fiction and fantasy. About a half-dozen authors contributed. Each of us created devotions based on speculative stories we’ve enjoyed in the past (e.g. The Hunger Games or Dune) along with our own stories. In my case, I took some of the short stories that have stuck with me—by classic authors like Ray Bradbury, Isaac Asimov and Jack Finney—and connected them to Biblical wisdom to form, I hope, concise inspirational messages. I think it’s a fantastic series. I’m glad Chris asked me to be part of it.

JR: Correct me if I'm wrong, but I'm guessing your best-known project is Amish Vampires in Space. One thing that impressed me in the Peril in Plain Space series is the emphasis on our responsibility to community and that our community may be larger than we think. How do Christians develop a stronger community, especially dealing with pandemics, protests, and political division?

KN: Wow, good question. The times have certainly made many aspects of community more difficult. I know I find myself, even when I’m outside the home in public spaces, wanting to isolate and withdraw. Just putting on headphones and going about my business, oblivious to those around. (Plus, it’s hard to communicate when everyone is wearing masks!)

Even online community can be difficult. There’s a lot of fear, uncertainty, and anger out there. It’s tempting to withdraw from that altogether—and for a season that might not be a bad thing, especially if you have people nearby who you should be connecting with. In Acts 1:8, Jesus talked about first reaching those closest to you and moving outward in your witness from there. I have younger kids, and I know I’ve enjoyed hearing and seeing more of them during these otherwise trying times—especially since I know they won’t always be this young. My oldest just signed up for drivers training!

I guess if I had any advice, it would be to be sensitive to those God puts in your path—either in your local vicinity or online. There’s a lot of hurt and insecurity out there. It’s a great opportunity to put faith in action. Find ways to serve and console!

JR: Maybe it's just me, but I also believe your dystopian works (the Dark Trench Saga, the Dark Trench Shadow Series, and the stand-alone novel Mask) also point to community in a more hostile society. (Does that mean vampires, zombies, and werewolves are less hostile?) Any lessons we can learn from Radial, Sandfly, and ThreadBare?

KN: I think the wisdom there too is to thrive in whatever environment you find yourself in. Be the encourager and the problem-solver. Steer clear of the negative as much as possible. Resist complaining and squabbling. Find like-minded folks and work toward a common, righteous goal.

One advantage Sandfly, Threadbare—and to a lesser extent—Radial have is that they are in near-continual communication with their support team. Whenever there’s a problem, there’s always someone available to talk to. Normal humans like us are invited into something similar with God himself. 1 Thessalonians 5:16-18 says, “Rejoice always, pray continually, give thanks in all situations.” If there’s one thing I think the world needs more of right now, it’s prayer.

JR: I know Amish Werewolves of Space came out late last year. What else is in the pipeline?

KN: I just sent a story off to the publisher. I’ve written a handful of stories in the Takamo gaming universe over the last couple years. It’s fun, because their universe is so vast that there are a lot of story ideas to play with. (Takamo started as a by-mail game in the 80s and is now being developed into a massive multiplayer online game.) It’s pure escapism. So far, my stories have revolved around a society of aliens that look like man-sized rats. This latest entry involves them too, but there’s a bit of an alternative history angle.

JR: Thank you very much for your time.

KN: You’re welcome, Jeffrey. Thanks for inviting me. May God bless all your endeavors!