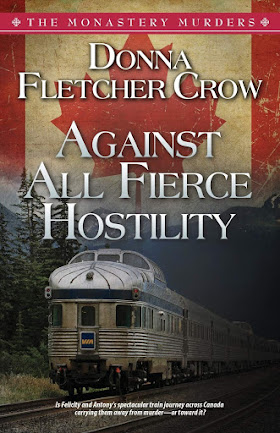 This is a well-written murder mystery that also expands one's knowledge of church history, as one would expect in this series.

The story is not as fast paced as other mysteries and suspense tales, but it is well worth your patience. When it gets going, it's like a train traveling from one end of the continent to the other. There are plenty of mysterious occurrences starting in England and through out a train trip across Canada. As far as the mystery, you have no idea who to trust. No, let me rephrase that. With the exception of the lead characters, there is no one above suspicion. In addition to the main story, you also hear several stories of church history - enough for you to know it's not a boring subject.

This is the sixth part in a series, but if you haven't read the other books, you can still enjoy this one. Likewise, if you read this first and want to read the earlier stories, this novel doesn't spoil its predecessors.

There are books that I enjoy sitting back with a warm cup of coffee (though Father Antony and Felicity might recommend tea instead), and this is one of them. I highly recommend it.

One thing I'm going to do on this blog in my reviews is to look at the value of the book apologetics wise. One theme developed in this book is the balance between a unity of the whole body of Christ and standing firm on its convictions. A regular feature in this series is Father Antony sharing stories of church history, and included this are illustrations of standing in the face of death and not being willing to renounce one's faith.

I received a copy of the book from the author for my unbiased review.

Posted by Jeffrey C. Reynolds at 2:00 AM